So here's the deal, a real scoop in fact: Life. After. scored - 'scuse the pun - the incredibly talented and hot-in-demand Tane Upjohn-Beatson as our sound designer/composer. Just check out some of his previous work!
Sound Designer/Composer - Tane Upjohn-Beatson 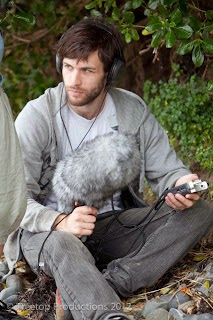 Tane is a Wellington based composer and sound designer working in theater and film. He also performs regularly as a live accompanist for improvised theater. He has worked on over forty NZ plays and films, receiving Chapman Tripp nominations for the Constance Scott Kircaldie Outstanding Composer of Music Award in both 2009 (A Most Outrageous Humbug) and 2010 (Katydid), and the Park Road Post Production Sound Designer Of The Year Award in 2011 (The Engine Room), and a Chapman Tripp win of the Critics Choice Award for improvised musical 'Vance Fontaine: Command Performance' in 2012.

Tane says, 'Life.After is gearing up to be an exciting and innovative show. I was initially attracted to the script's gestural and surreal nature, immediately conjuring a soundscape in my head of barely heard voices, distant bells, and lullabies on the wind. At times poignant, menacing and playful and all with a heavy handed dose of lynch-esque magic realism, I'm really looking forward to scoring and sound designing this piece of theatre!'


Thank you, Tane, for coming on board! I can't wait to hear what the show sounds like!
Posted by Ophelia thinks hard at 1:05 am